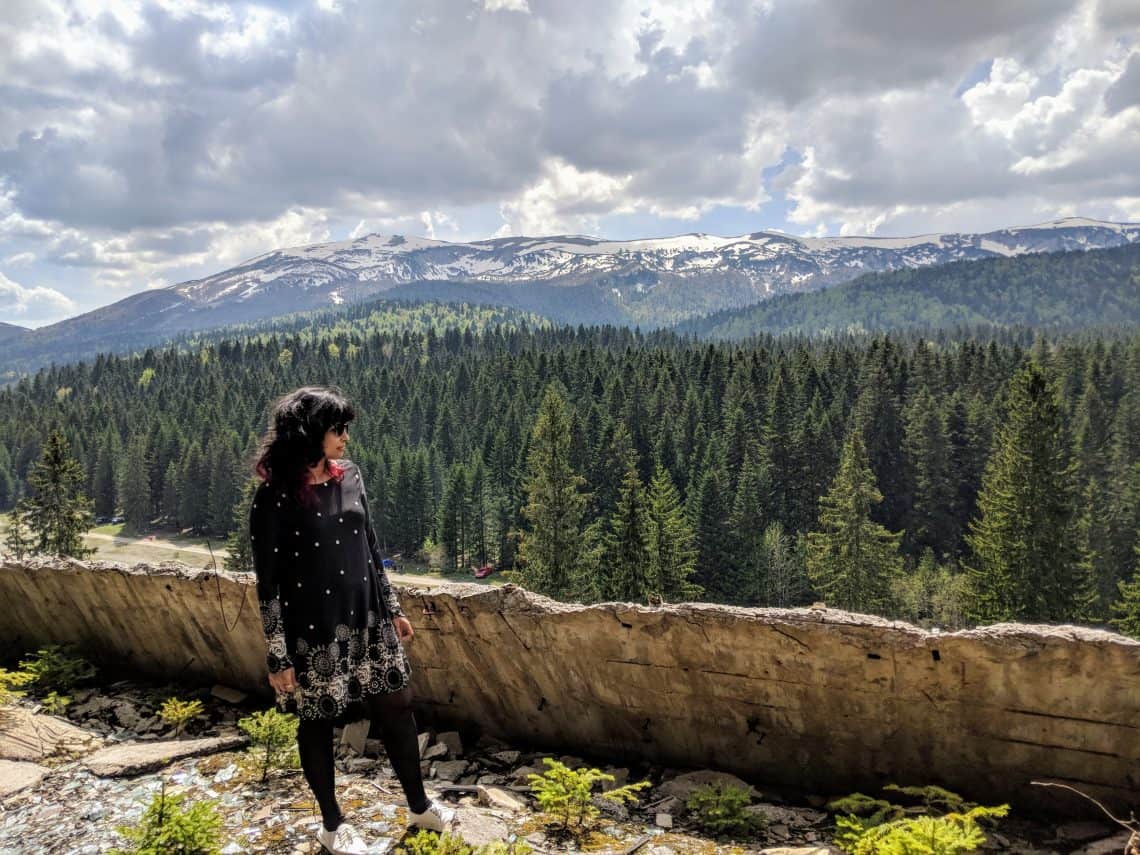 My new love is for the Balkans. I was forced to start my Eurotrip from Sarajevo because of botched visa dates (Courtesy Italian consulate in Mumbai! Grrr…) and I flew the no-frills FlyDubai (A surprisingly cheap and functional airline) into Sarajevo, but thanks to the initial hiccup (everything happens for a reason, yada, yada) I was blown away (oops, the wrong choice of words, given this was once a war-torn, strife-filled region) I was totally impressed. I had no traveller experience to relate to before I came here, I’d read up literally nothing, and boy, o boy, did I learn a lot.

Best of all were the people. They’d obviously suffered a lot in the past few decades, most of them have seen and lived through the civil war, and it weighs on their shoulders like scabs of grief that can never heal. The country and the city hasn’t fully recovered from the effects of the war yet. In fact, many of the torn-apart buildings haven’t even been rebuilt, often times deliberately so, as if to keep the pain alive, a reminder. Humility and self-deprecating humour is the pervasive local attitude; I found it refreshing. Hope that never changes.

A bit about Sarajevo

Sarajevo is the capital of Bosnia and Herzegovina, and lies by the Miljacka River, surrounded by the Dinaric Alps. It has a population of 440,000 and is largely Muslim. The Ottomans took over the city in the 15th century and made Sarajevo the administrative seat of Bosnia and Herzegovina in 1850. When the Austro-Hungarian Empire defeated the Turks in 1878, Sarajevo remained the administrative seat and was modernized in the following years. Eventually, it grew to become the center of the Bosnian Serbs’ resistance movement, whose resentment of Austrian rule resulted in the Bosnian Serb, Gavrilo Princip, assassinating the Austrian heir apparent, Archduke Franz Ferdinand, and his wife (June 28, 1914) resulting in the first World War and the world as we knew then changing irrevocably. (Watch the movie Sarajevo on Netflix for a primer on this)

Yugoslavia was formed after World War II by the merger of six socialist republics – Bosnia and Herzegovina, Croatia, Macedonia, Montenegro, Serbia, and Slovenia. As Yugoslavia disintegrated in the early 1990s, Bosnian Muslims and Bosnian Croats (mostly Catholic) voted for Bosnia-Herzegovina to be independent. But the Bosnian Serbs, mostly Orthodox and backed by Serbia, wanted Sarajevo and other Bosnian territories to be part of a greater Serbia. Then came the civil war.

About 100,000 people died in that war.  It finally ended with the Dayton Accords, and today, the Presidency of Bosnia and Herzegovina is a three-member body which collectively serves as head of state: 1 Bosniak (Muslims), 1 Croat (Catholics), 1 Serb from the Republika Srpska (Orthodox). Together, they serve one four-year term and chairmanship rotates every 8 months. This is easily the most complicated government in the world.


Now that you’ve had a short primer, how do you spend 2 days in this city?

Take a walking tour of the city

A bustling, crowded marketplace with cobbled streets, mosques and quaint (both old and locals-frequented, and new and hip) eateries, hookah bars, you could spend a full day here. You’ll get a tang of the city’s laid-back nature as you walk along the streets, with toothless locals sharing a pot of coffee and smiling at passersby, and children chasing pigeons at the market square, around Sebilj, a pseudo-Moorish fountain. You’ll also get a feel of how culturally mixed the city is as you observe the various influences: Ottoman, Austro-Hungarian, Slavic, Muslim, Orthodox, Catholic, and Jewish. Next…

Built-in the 16th century, it is the largest historical mosque in Bosnia and Herzegovina and one of the most representative Ottoman structures in the Balkans. It has a madrassa, a library, a haniqah, a Hamam. A late 16th-century clock tower is adjacent to the Begova Džamija. Impressive.

We stayed at Boutique Hotel Central which as the name suggests, was central. We loved it! Rooms were fantastic too.

Go to the Latin Bridge

The Latin Bridge is an Ottoman bridge over the river Miljacka. The northern end of the bridge was the site of the assassination of Archduke Franz Ferdinand, which caused World War I. There is a Museum (with a sign that clearly says MUSEUM) which is the exact spot of the assassination.

When we arrived there, we were hard-pressed to believe this was the same place the assassination took place. There was no plaque, no sign, no crowds! I stood over the bridge and ate my gelato in peace, the blueberry yogurt coursing down my fingers. Btw, the ice-creams in the Balkans rock, even more so that the ones in Italy. Everyone seems to be having them every hour, it’s quite a popular past-time.

Calling their coffee Turkish is blasphemous (though pssst…it’s very much so). It was introduced in the country by the Ottomans and the way it is made and tastes (almost) the same; at least I thought so. Bosnian coffee is made with roasted coffee beans that are ground into a fine powder and cooked in a small copper-plated pot with a long neck (džezva) which is then placed on a hot plate. The coffee is stirred once until the coffee on the top becomes like fine mousse. Then drink away. Watch a demo.

Eat at Barhana and drink some pre-lunch Rakija

i.e. fruit brandy. Be spoilt for choice of flavours at Barhana and redo a slightly intoxicated round of the bazaar. The food is good here too with a wide variety of Bosnian favourites to choose from. Largely open air (so yes, as in all of the Balkans, you’ll breathe plenty of cigarette smoke) and the waiters are quite nonchalant. Just good for food and drinks, then. And since it’s right off the main street at Bascarsija, not too much of a detour in your wanderings.

Ćevapi is a grilled dish of minced meat, found traditionally in the Balkans. They are considered a national dish in Bosnia and Herzegovina and Serbia. They are usually served 5 or 10 pieces on a plate with flatbread (lepinje or somun), accompanied by chopped onions, sour cream, or kajmak. Somewhat like kebabs. They are yummy!

Head over to Pivnica HS or visit Zlatna Ribica (Kapitol 5) for a drink. Or head back to Bašcaršija for another plate of sumptuous Ćevapi – obviously I couldn’t get enough of it. I loved the dinner we had at Ćevabdžinica Kastel or take your pick. Or try a hookah bar, but be warned that hookah bars in most of the Balkans do not serve alcohol, but there’s throbbing music, and unlimited finger food, so quite a heady experience nonetheless.

Do a day-long war tour. See the following:

Our guide of choice was Erwin from Toorico Tours and we had an amazing time with him, getting an insider’s perspective on the one war-torn country which we would’ve never gotten otherwise. It is easy to stand away and comment on war and suffering, but to have gone through it yourself and speak passionately about your city, country and childhood experiences as he did, was truly enriching for us. This was a tour flavoured not by the places we visited, but by the guide itself and his view of things. It also worked out well for us that Sarajevo is still a relatively unexplored city, and tourists are few. Every place he took us to was only the group of us, apart from maybe the war tunnel.

Highlights of the trip:

The Sarajevo Tunnel is also known as Tunel spasa and Tunnel of Hope, was an underground tunnel constructed in 1993 during the Siege of Sarajevo in the midst of the Bosnian War. It was built by the Bosnian Army in order to link the city of Sarajevo, which was entirely cut off by Serbian forces, with the Bosnian-held territory on the other side of the Sarajevo Airport, an area controlled by the United Nations. The same Sarajevo airport is still operational (it is tiny!).

After the war, a museum was built onto the historic private house whose cellar served as the entrance to the Sarajevo Tunnel. Visitors can still walk down a small length of the tunnel (about 20 meters). The museum now displays material from the war including a movie, photographs, military equipment, flags, military uniforms, etc. More on the Sarajevo Tunnel.

The Jewish Cemetery lies on the slopes of Trebević Mountain, in the south-western part of Sarajevo. It is one of the largest Jewish cemeteries in South-East Europe. It has great views of the city but the cemetery is largely in disuse. Like all places at a certain height in Sarajevo, the Jewish Cemetery was on the front line during the war and was used as an artillery position by Bosnian Serbs. It was thus severely damaged by bullets and fire caused by explosions.

A bit underwhelming, yet the first Olympic rink I’d seen. Plus I got to pose with a faux gold medal Erwin had brought (nice touch) and had some moist Ćevapi on the grass. Like a picnic.

The Sarajevo Olympic Bobsleigh and Luge Track is a bobsleigh and luge track in the Trebević mountains, built for the 1984 Winter Olympics. A crazy, crazy sport, so scary, I tried not to think about it, as I walked the graffiti-laden, moss-riddled track, posing for pictures, admiring the out-of-control nature around me. Enjoying the bright sun. Then err…I noticed the bullet holes.

See the track, then and now.

More abandoned places, what fun! The Olympic Hotel in Igman is where many of the competitors and officials stayed during the 1984 Olympics. It had all the amenities: fancy rooms, dance floor, swimming pool, now eerily abandoned. During the war, it was an artillery point from which Bosnian-Serbs fired into the city below. Prisoners were imprisoned and tortured here.

A picture Erwin took promising to be artistic. But eh, we joke about it now. How else to make peace with it?

The thing about Tesla

Everybody in the Balkans claims he is theirs! The Croatians, the Serbs, the Bosnians. But the forgotten and often underappreciated scientist, Nikola Tesla was a Serbian-American inventor known for his contributions to the design of the modern alternating current electricity supply system. Tesla’s parents were Serbs and since Serbs are spread all over the Balkans, and he is one of the more famous scientists from the region, everyone lays claims to him. Born in Smiljan, Austria-Hungary, now Croatia, Tesla died in New York in 1943 and stayed in America for the most part of his adult life. So he was hardly even around.

If you have a valid multi-entry Schengen visa, you can enter most of the Balkans without getting a country-specific visa (for tourist purposes). Stay in Croatia or Bosnia is not counted towards a stay in Schengen region but the visa must be valid for the period.

The Talgo train journey from Sarajevo to Mostar ranks as one of the most scenic journeys in the world. It costs €6 (don’t you just love Bosnia) and is a 129 km (2 hour) journey across mountains, rivers, and lush grasslands. See a video and Timetable.

Also, see a full list of the world’s best train journeys to stoke that wanderlust.

Piqued? Is Sarajevo on your list yet? I promise you, my next long trip is going to be exploring the Balkans. Can’t wait.